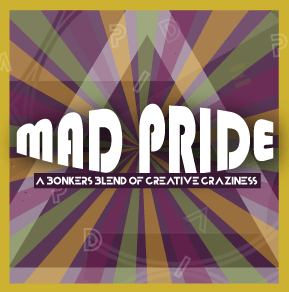 Under the umbrella of Liverpool’s favourite multi-arts grassroots festival, we organised the city’s first ever Mad Pride celebrations.

Planning the event from scratch including programming and promotion, we delivered it on Sunday 3rd April 2016 at 24 Kitchen Street. Mad Pride thrived off an Andy Warhol’s Factory-style vibe: live bands were playing, DJs were spinning tunes and weird and wonderful pieces were performed and the audience created a pop-up art exhibition.

To top off celebrations, we organised the Mad Pride Parade: first of its kind at Threshold since its inaugural festival six years ago. Windows opened along our parade route, cars stopped to take photos and revellers danced in the streets alongside, but we kept it safe – and fun! Calling all mystics, mad hatters and meddlers! Join us for a FREE day of music, musings & mayhem!

Liverpool Mental Health Consortium has teamed up with Threshold Festival Six to bring Mad Pride celebrations to Liverpool for the first time. Instrumental to the success of previous World Mental Health Day celebrations, Threshold fully embraces the creative bonkers-ness that is Mad Pride.

Taking place at 24 Kitchen Street on Sunday 3rd April, Mad Pride  promises a line-up of music, spoken word and performances alongside  a range of creative activities for party-goers to get stuck into. Expect an Andy Warhol’s Factory-style vibe as local artists offer screen-printing, wall-papering and lantern-making workshops, with a pop-up exhibition of finished artwork decorating the walls of the venue.

Full line-up is as follows:

“There’s a place like no other on earth. A land full of wonder, mystery and danger. Some say to survive, you need to be as mad as a hatter – which luckily I am! – You’re entirely BONKERS. But I’ll tell you a secret, all the best people are.”